Much of Syria comprises desert plateaus with elevation ranging from 200-1,000 metres. Low precipitation means water resources are scarce. As a result of rapid population inflow from rural areas coupled with industrialization, urban areas suffer from water shortages, groundwater aquifers are heavily overexploited and, with almost one third of total water resources originating outside the country, the need for sustainable and strategically planned water resources management becomes apparent.

Rain is the main water resource in Syria, affecting the availability of all other water resources. The average annual rainwater resource is estimated at 46 billion cubic metres (BCM). In drought years, this figure is much lower. Furthermore, the rainfall is unevenly distributed in both space and time. Rain and sometimes snow fall between October and May, mainly in the mountains. The country is divided into five zones based on the average annual precipitation.

Figure 1. Percentage of total available conventional water in the water basins of Syria.

Groundwater is available in most of the country’s geological formations. Some of the main aquifers are non-renewable (fossil water), and their exploitation is considered as mining. Historical and actual data indicate that the groundwater withdrawal far exceeds the natural recharge rate in almost all areas.

The main groundwater aquifers are those of Anti-Lebanon and the Alawite mountains. There are several springs discharging from this transboundary groundwater aquifer system, such as the Ari-Eyh, Barada, Anjar-Chamsine and Ras el-Ain. Recharge to the system occurs from heavy precipitation in the mountainous regions. which infiltrates through karstic layers.

Treated wastewater
Twenty-six wastewater treatment plants (WWTPs) are in operation, with a total capacity of 821,000m3/day or 299 million cubic metres per year (MCM/yr). There are only four major centralized WWTPs in the main cities: Damascus, Hama, Homs and Aleppo. The remaining 22 WWTPs are decentralized, with capacities ranging between and 400 m3/day. However, most WWTPs are not working to their full capacity.

In Syria, desalination of seawater has only marginal value, and the total desalination capacity is 8.18m3/day, which amounts to less than 3MCM/yr. This is approximately 0.01% of the total water withdrawal, and therefore the importance of this component is negligible. The use of desalinated water is limited to industrial purposes only. On the one hand, desalination costs are high; on the other, the sea is far from the water-deficit areas. 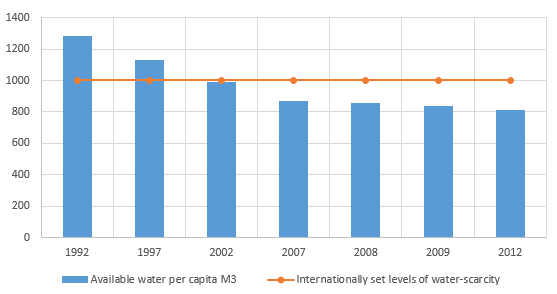