Libya one of several countries in the Middle East and North Africa facing high water stress, mainly because of its semi-arid to arid climate and low rainfall. Water resources in Libya rely heavily on groundwater (about 97% of the total water consumption).

Sustainable development in the country is being affected by the lack of renewable water resources as well as fossil groundwater overexploitation to meet water increasing demand. Other challenges include seawater intrusion, deteriorating water quality and an inadequate institutional framework. These and other issues related to energy and food need more attention if the United Nation’s Sustainable Development Goals (SDGs) are to be met by 2030.

Situated in North Africa, Libya has a total area of 1,674,577 km2. It is bordered by the Mediterranean Sea to the north, by Egypt to the east, Sudan, Chad and Niger to the south and Tunisia and Algeria to the west (Map 1).

The most outstanding natural features are the Sahara desert and Mediterranean coast.[1] Generally, Libya’s topography slopes gently towards the north. The mountains, which are located in the north-western and north-eastern as well as southern and central parts of the country, are of low to medium latitude.[2] The only highlands are near the border with Chad, where the Tibesti Massif rises to over 2,200 metres.[3]

Only the coastal zone, which makes up 2% of the surface area, is considered suitable for agricultural activities. The fertile lands of the Gefara Plain in the north-west and Jabal al-Akhdar in the north-east account for more than 80% of agricultural food production, which is mostly dependent upon rainfall and groundwater. The remaining area is made up of gravel or sand dunes, mountains or sabkhas (salt marshes) with some scattered oases (Map 2).

The climate varies but is strongly influenced by the Sahara to the southand the Mediterranean to the north. The lack of natural barriers results in a gradual transition from one climate to another.[4] Accordingly, three climatic zones can be distinguished:

1. In the coastal lowlands, the climate is Mediterranean, with warm summers and mild winters.

3. Moving southwards to the interior, semi-desert and desert climate conditions predominate, with stifling temperatures and large daily thermal amplitudes. Rain is rare, irregular and diminishes gradually towards zero in the far south.

The average annual rainfall varies between zones, according to the geographic location and topography (Map 3). In general, rainfall in the north ranges between 100 and 500 millimetres per year (mm/yr), whereas the south receives as little as 10 mm/yr. Some areas such as Kufra and Murzuq receive no rain at all.[5]

All climatic zones experience temperature variations. In the summer, temperatures exceed 40 degrees Celsius, whereas in the winter they may fall below zero. Snow is occasionally seen on the northern hills and mountains, especially those in the east.[6]

The last census in 2006 put the population of Libya at 5.32 million (Figure 1). According to the UN World Population Prospects, this number had risen to 6.87 million by June 2020.[7]It is expected to reach 9 million by 2030,[8] putting additional pressure on resources, especially food, water and energy.

The majority of the population lives along the Mediterranean coast, with a large proportion in the main cities of Tripoli and Benghazi.

Life expectancy increased from 62.2 years in the 1980s to 72.8 years in the past decade. Child mortality is low.

Libya’s economy could be described as agriculture-based until the early 1960s, when agriculture accounted forabout 30% of the gross domestic product (GDP). This contribution had fallen to 2% by 2007, whereas oil contributed 71% of GDP. The economy is now reliant on oil, and the performance of the agricultural sector has continued to decline, in part because of annual policy changes and the withdrawal of subsidies.[10] [11]

More detailed information about the Libyan economy by sector is shown in Table 1. 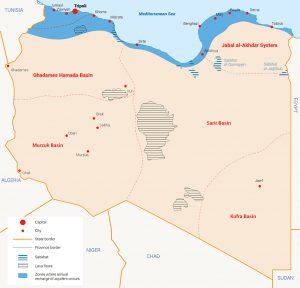 Libya has no rivers, and its surface run-off is limited to short floods following extreme … 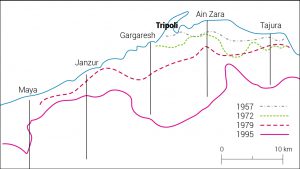 In a largely arid country like Libya, clean water is most valuable for meeting human needs … 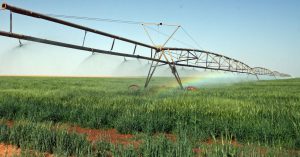 Water Use in Libya

Water consumption in Libya is rising as a result of population increase, urbanisation and … 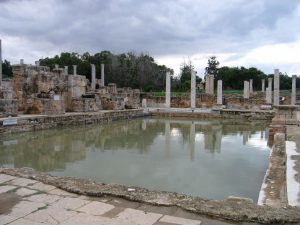 Traditional systems are widely used to collect water for irrigation and domestic use. …

Water Management and Challenges in Libya

Water governance fell under the General Water Authority (GWA), which was responsible for … 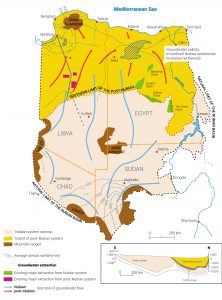 Libya has no shared surface water but shares groundwater with several of its neighbours. … 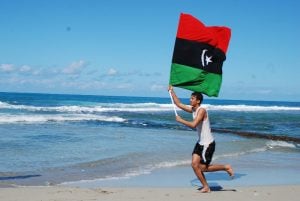 What Does the Future Hold for Water in Libya?