Co-Author: Dr. Abdulla Noaman is a professor at the department of civil engineering and in the Water and Environmental Centre (WEC) at Sana’a university. Dr. Noaman is a member of IAHS (International Association of Hydrologist) and Gulf Water Science & Technology Association (WSTA).

Co-Author: Dr. Fadhl Ali Al-Nozaily is A Professor at the Department of Civil Engineering, Faculty of Engineering of Sana’a University, Yemen. He is a Vice director of Water and Environment Centre, Sana’a University and a member of Gulf Water Science & Technology Association (WSTA).

Peer Reviewer: Dr. Mohammed Hezam Al-Mashreki, is an Associate professor at the Renewable Natural Resources Research Centre of the Agricultural Research & Extension Authority, Yemen. He is a national coordinator for the Global Soil Partnership (GSP) and a National Counterpart of IAEA’s Soil & Water Projects. He is also a peer reviewer for some national and International Journals. He is a member of national and regional land & water scientific associations and received a number of awards for contributions to his field of investigate.

Introduction to water in Yemen

Located in a dry and semi-arid region on the Arabian Peninsula, the Republic of Yemen is facing a severe water crisis. The country is physically water scarce due to its limited rainfall and geographic location with no shared international rivers. However, this scarcity extends beyond physical water availability; Yemen is also economically water scarce.[1] It is currently the seventh most water-scarce country in the world, with the per capita share of renewable water resources only around 80 cubic metres (m3).[2]

It is estimated that the amount of water required during the next decade to meet the growing demand will be about 4.5 billion cubic metres (BCM). The water deficit in 2000 was 700 million cubic metres (MCM), rose to 900 MCM in 2010 and is expected to reach 2,500 MCM in 2025. Most of the water comes from groundwater sources – springs, wells, boreholes – and this has led to serious groundwater depletion as withdrawals far exceed annual recharge.[3]

Yemen is located in the south-western corner of the Arabian Peninsula (map 1). The country is administratively divided into 21 governorates (provinces), with a total area of about 445,500 square kilometres (km2) that consists largely of mountains and deserts. Environmentally, Yemen can be divided into four major agro-ecological regions: the coastal plains, the mountains, the eastern plateau and the islands. There are many islands, the largest of which are Socotra in the Arabian Sea and Kamaran in the Red Sea (Table 1).[4]

Yemen has a predominantly semi-arid to arid climate, with rainy seasons during spring and summer and high temperatures prevailing throughout the year in low-altitude zones. This is primarily a consequence of the country’s latitude.

This causes intense solar radiation and brings the area during spring and summer under the influence of the intertropical convergence zone, a belt of converging trade winds and rising air that encircles the Earth near the equator. The southern highlands receive 520-760 millimetres (mm) of rain per year. The south-western highlands, most notably Ibb city, receive more than 1,500 mm of rain each year.[5]

In terms of aridity, the ratio between average annual precipitation (P) and annual reference evaporation (E) in principle marks five different zones (Map 3). The climate varies from hyper-arid (deserts, most of the plateaux, parts of the coastal plains) to sub-humid (scattered wetter zones on the western and southern slopes of the mountains), with small humid areas in Ibb province.[6]

The FAO’s Yemen Plan of Action 2018-2020 indicates that Yemen has been among the poorest countries in the world for decades.[10] It is now facing the world’s largest humanitarian emergency. Instability, violence and import/export restrictions since the outbreak of war in 2015 have devastated the economy. The GDP has declined by 41% since March 2015 – equivalent to a loss of $32 billion (or $1,180 per capita). Since 2015, the currency has lost 80% of its value – 28% in 2017 alone. Losses in infrastructure have been estimated at $19 billion, bringing massive service disruption across all sectors.

Prior to the conflict, agriculture and fisheries contributed between 18-27% of GDP, 25-30% of the annual food requirement and employed more than 50% of the workforce. These percentages are now shrinking as the agriculture sector has been one of the worst hit by the war and local food production has been severely compromised.[11] 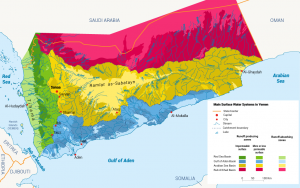 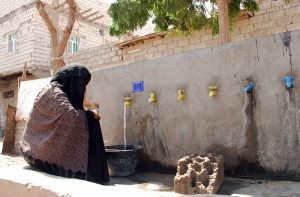 There are no networks monitoring surface water quality in Yemen, as far as is known. … 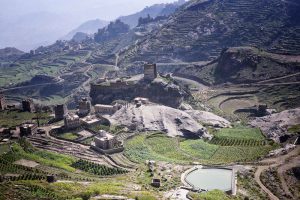 Water Use in Yemen 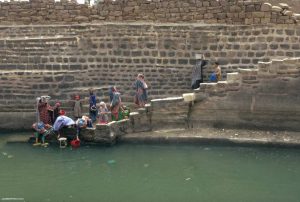 Marib dam is the first water harvesting system in history was built in the Arab region. … 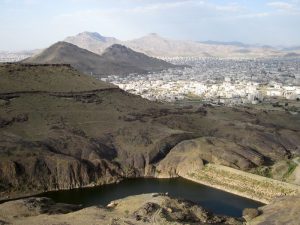 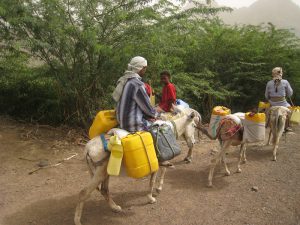 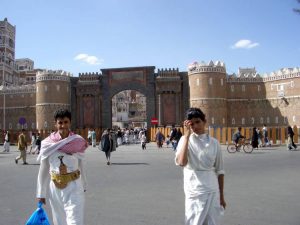 What Does the Future Hold for Water in Yemen?

Yemen Prospects Water Scarcity Water Strategy
We use cookies to ensure that we give you the best experience on our website. If you continue to use this site we will assume that you are happy with it.Ok