Description of the Recommended Option

The recommended optimum solution is a pipeline for the transfer of 2,000MCM/yr of water from the Red Sea. The intake consists of a submerged pipe off the eastern shore of the Gulf of Aqaba. More research is required to determine the optimal depth of the intake (between 25 and 140m). Fourteen pumps, each with a capacity of 15 megawatts (MW), will be installed. The pump station has a gross pumping head of 273m and a capacity of 64.7 cubic metres per second (m3/s). The energy requirement for the pumping station is estimated at 1,920 gigawatt hours per year GWh/yr. From the pumping station, there is a 25.5km rising tunnelled section. The tunnel will have a steel lining and an internal diameter of 5.5m. Construction of a much shorter (straight) tunnel requires additional geotechnical investigations. Such a tunnel could be $500 million cheaper. The transfer continues through six buried steel pipes, each with a diameter of 2.9m over a distance of 66.5km to the water divide of the Dead Sea basin, known as the Gharandal saddle. At this highest point in the route (220m asl), a 175,000m3 balancing reservoir will be constructed. The 84km gravity-flow conveyance consists of three parallel pipes, each with a diameter of about 3m. Special arrangements will be made to accommodate a small degree of rotation and longitudinal deformation of the pipes in areas where the pipeline crosses active faults in this seismically active area. Provision will be made for the detection of insidious small-scale leakages, which may occur undetected, while in-line isolation valves at regular intervals will minimize the impact of large catastrophic leaks.

The natural location for the desalination plant would be at the balancing reservoir, but this would require long supply lines for the potable water. A location downstream of the gravity section, at a lower elevation, provides an optimal balance between the shorter length of the potable water transmission lines and the extra pumping head needed. Of the better-established desalination technologies, reverse osmosis was considered economically viable for large-scale seawater plants in the absence of surplus heat from other industrial processes such as power generation. The quality of the seawater is generally good, so pre-treatment can be limited to multimedia filtration. A balancing storage facility for the desalinated water, with a maximum capacity of 250,000m3, will be provided at the plant’s outlet.

Two hydroelectric power plants will be constructed, one (113.8MW) at the high-level desalination facility and the other (135MW) immediately south of the chemical industry solar evaporation ponds, close to the village of Feifa. This lower site will also accommodate the incoming penstocks (enclosed pipes that deliver water to the turbines), an energy dissipation basin (for use in the event the power station must be shut down) and the outgoing discharge canal. A two-metre-high dyke will protect the location from flooding. The best route for the conveyance of water in a canal from the power plant to the Dead Sea (the restitution canal) was determined to lie between the two sets of evaporation ponds.

The energy balance of the recommended option is summarized in the figure above. The energy consumed includes that required for pumping the potable water to Amman but not to Israel or Palestine. The high-level desalination plant requires about 3.2 kilowatts for the production of one cubic metre of potable water.

Overview of the recommended option 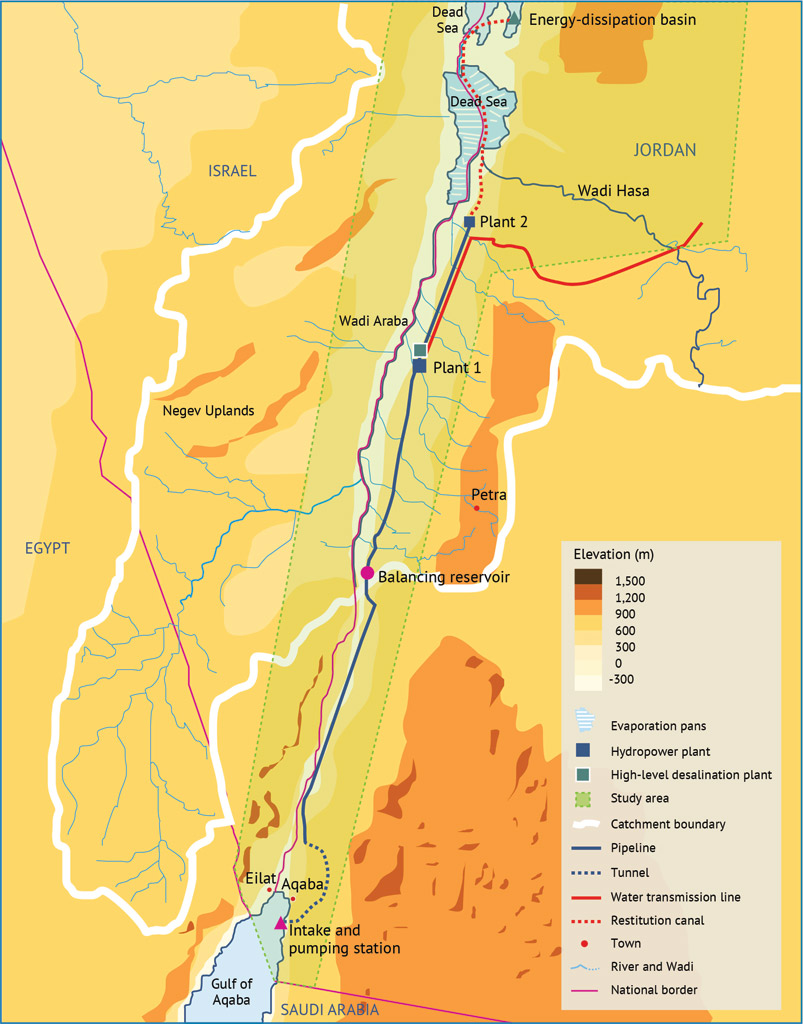