With less than 200 millimetres of annual rainfall, the climate in the marshlands is arid subtropical. It is characterized by hot summers (with average maximum temperatures around 43°C) and mild to cool winters (with average minimum temperatures around 4°C). In the summer, dust storms are common and heat waves can raise the temperature to 48°C. During the winter, the temperature can drop to -8°C. Humidity is low and evaporation from free water surfaces is high, causing water losses due to evaporation ten times higher than rainfall contribution over the area.[1]

Iraq consists essentially of a flat, low-lying plain that rises gently to the south-western plateau, reaching elevations of about 1,000 metres, and the north-eastern Zagros Mountains, which rise to elevations of up to 3,000 metres. Elevations on the almost featureless Mesopotamian Plain are characteristic of most of the country and vary from a few metres below sea level to about 400 metres above.

The primary source of water in the marshlands is the Tigris and Euphrates rivers, with several major tributaries flowing from Iran towards Tigris and Hawizeh. From the head of the Upper Mesopotamian Plain to the Gulf, the rivers meander slowly. The loss of velocity causes the rivers to deposit their silt, thereby building up their beds and banks above the level of the plain. This makes the rivers prone to overflow their banks seasonally and change course capriciously. Throughout history, the rivers have bifurcated and altered their courses on numerous occasions. It is believed that some of the deeper portions of the marshes (lakes) were former river courses that were cut off as the rivers changed course upstream.

The generally low slope of the plain decreases even further[2] in the lower portion of the Mesopotamian Plain. The Tigris and Euphrates split into many branches and form an interior delta. The branches, in turn, split into smaller distributaries that meander and shift. The levees are smaller and lower than in the Upper Mesopotamian Plain, the groundwater is closer to the surface and depressions between the channels become marshy.

Past the delta, the waters flow into the marsh and lake areas, where the land is essentially flat. At this point, the groundwater intersects the ground surface and groundwater outcrops, forming ponds.

Historically, the marshlands constituted a chain of almost interconnected marsh and lake complexes that flowed into one another. During periods of high floods, large tracts of desert were under water. Consequently, some of the formerly separate marsh units would merge together, forming larger wetland complexes. The wetlands themselves were made up of a mosaic of permanent and seasonal marshes, shallow and deep-water lakes, and mudflats that were regularly inundated during periods of elevated water levels.

Further downstream, the Tigris and Euphrates join to form the Shatt al-Arab River, which flows into the Persian Gulf and is therefore influenced by tidal action.

Before the 1970s, there was a complex system of natural channels where the Tigris and Euphrates formed interior deltas upstream of the marshes, and the marshes created a highly interconnected system in which the rivers merged and disappeared. This natural system has been altered in the last century with the implementation of agricultural canals, drainage systems and hydraulic structures, which impact significantly the hydrological management of the entire system.

Water from the Tigris feeds the Hawizeh and Central marshes due to the inadequate carrying capacity of its channel. The main Tigris channel reduces its cross-sectional area as it nears the marshes; the river flow capacity decreases significantly.

The Euphrates is constrained by higher embankments all the way from Nasiriyah to Qurnah. Nevertheless, secondary branches exist and are able to connect the Central Marsh to the Euphrates via a number of breaches along the north embankment of the Euphrates. The Euphrates is divided into several arms downstream of Nasiriyah and flows into the Hammar Marsh along several secondary channels; the main branch of the Euphrates flows toward the confluence with the Tigris at Qurnah, but is currently blocked by a dyke that facilitates overflow through the wetlands.

Map 1 illustrates the main connections between the marshes and the hydrological network. 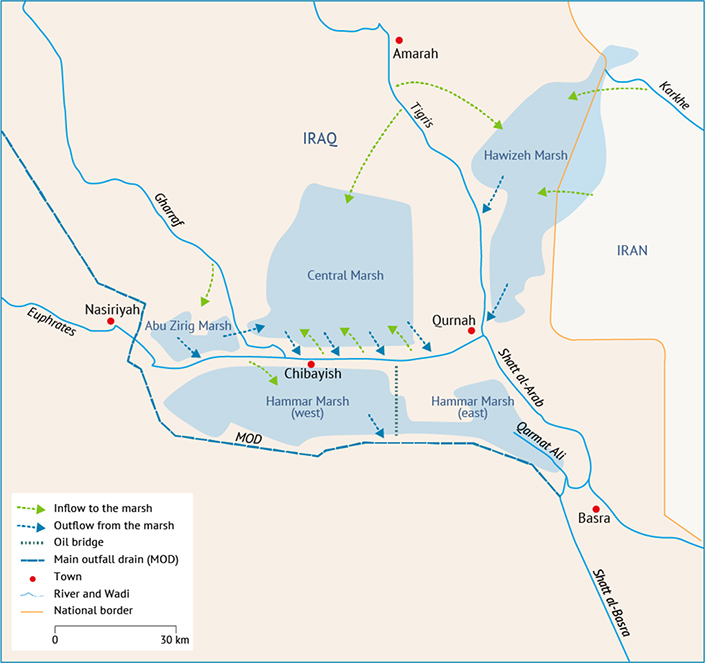 Map 1: Main connections between the marshes and the hydrological network.

[1] Food and Agriculture Organization of the United Nations (FAO). Iraq Country Profile. Available at: www.fao.org/ag/agp/AGPC/doc/Counprof/Iraq/Iraq.html, accessed 6 February 2017.
[2] Sanlaville, P. (2002). ‘The Deltaic Complex of the Lower Mesopotamian Plain and its Evolution through Millennia’. In The Iraqi Marshlands: A Human and Environmental Study. Nicholson, E. and Clark, P. (eds).