With less than 4% of water fit for human use, the Gaza Strip has been facing a steadily worsening water crisis for the past decade. Gaza is one of the most densely populated areas in the world with more than 4,500 inhabitants per square kilometre [1], and the natural freshwater supply no longer meets the needs of the territory’s 1.76 million inhabitants.

Gaza’s only natural source of fresh water is groundwater. The Coastal Aquifer, which is the groundwater body that lies beneath the Gaza Strip, is currently being exploited at more than three times its sustainable rate. In other words, the aquifer can sustainably produce 55-57 million cubic metres per year (MCM/yr), but at the moment 170-200 MCM is being extracted annually.

After decades of overpumping from the aquifer, seawater is now seeping into the groundwater. This means that the water that flows from taps in Gaza is very salty and is not drinkable.

In addition, the absence of proper water treatment facilities throughout the Gaza Strip means that every day around 90 million litres (L) of untreated or partially treated sewage is seeping into the groundwater and flowing into the Mediterranean Sea. Overall, more than 96% of water in the Gaza Strip is unfit for human use. But as the Coastal Aquifer is the only source of water, Gazans have no choice but to use it, with severe consequences for public health.

The World Health Organization (WHO) estimates that contaminated water is responsible for 26% of all disease in Gaza and 50% of children suffer from water-related parasitic infections. Moreover, water is scarce, with only 70-90 L of water available per person per day – less than the standard set by the WHO of at least 100 L per person per day. This already dire situation further deteriorated after Israel launched ‘Operation Protective Edge’ on the Gaza Strip in the summer of 2014. Besides the destruction and damage of homes, businesses and road networks, the operation also caused an estimated $34 million in damage to Gaza’s ailing water infrastructure, much of which had still not been repaired by November 2015.

The situation is urgent. As far back as 2009, the UN Environment Programme warned that Gaza’s aquifer would be irreversibly damaged if no action was taken:
“The state of the environment in the Gaza Strip is bleak from any perspective… The aquifer is severely damaged and collapsing quickly. Unless the trend is reversed now, damage could take centuries to reverse… Ideally, abstraction from the aquifer should cease and a monitoring system should be installed to evaluate recovery. Controlled abstraction should only be permitted once the aquifer recovers and the sustainable yield is recalculated using accurate data on inflows. Alternative sources of water should be developed and used to allow the Coastal Aquifer to rest.”[2]

By 2012, Gaza’s Coastal Municipalities Water Utility warned that the aquifer could collapse by 2016 and the damage could become irreversible by 2020.[3] Measures are being taking at different levels to improve the situation but many obstacles remain, both on a domestic and regional level. 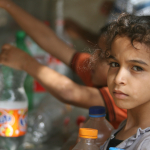 Why is There a Water Crisis in Gaza?

In 1997, the World Bank described the water situation in Gaza as an “emergency state of affairs”. Yet nearly 20 years on, the levels of pumping have only increased, pollution has worsened and large parts of the water infrastructure in the area have bee... 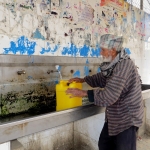 How Does the Water Crisis Impact Life in Gaza?

Gaza’s water crisis affects every one of the territory’s 1.76 million inhabitants. The heavy pollution of water resources in the Gaza Strip has a severe impact on public health; children are particularly at risk from water-related diseases....