The water crisis in Palestine cannot be presented in isolation from the political context, which continues to affect the economy, population, resource distribution and land ownership in the territories. However, because of the complexity of the issues and the limited scope of this report, the events that have impacted the water situation are only briefly discussed here.

Historically, Palestine was one country before 1947 (see Map 1a). The territory was later divided under UN resolution 181 between Israel (Jewish state) and Palestine (Arab state).

Over the next 20 years, Israel expanded its territory to occupy more and more Palestinian land until Gaza and the West Bank became geographically completely separated from each other (Maps 1b and 1c). The State of Palestine today refers to the Gaza Strip and the West Bank (Maps 1c and 1d).

After the 1967 war, Israel occupied the West Bank and Gaza Strip and enforced a number of measures to control the water resources in the Palestinian territories, which they had until then not had access to. These measures included:


Theoretically, these permits should have been obtainable (if only after a long, drawn-out bureaucratic process). In reality, in the 30 years from 1967 to 1996, only 13 permits were granted.

In 1995, in an international effort to solve the long-running conflict, including the water issues, the Interim Agreement was signed between Israel and Palestine in Oslo. A new system for water-related project approvals was set up and implemented as a result of the Oslo Accords in 1996. All such projects are now subject to the approval of the Joint Water Committee (JWC). This has resulted in a significant increase in projects being approved compared with the previous 30 years. Out of the 417 projects presented to the JWC during the period 1996-2008, 57% were approved. However, as of the end of 2008, 143 projects were still awaiting approval and 22 had been rejected (Fig. 1).

Further complicating the current process at the JWC is the fact that the West Bank has been divided into three jurisdiction areas, known as; A, B and C. Area A, is under Palestinian jurisdiction (excluding water issues). Area B, is under mutual jurisdiction and Area C, (representing 62% of the area of the West Bank) is solely under Israeli jurisdiction (Map 3). These divisions are used by the CA to veto JWC decisions. Among well-drilling (water supply) projects alone, by the end of 2008 only 65 of 202 had been approved by the JWC, and only 38 of these had been implemented after receiving CA approval.[2]

Figure 1.Status of Palestinian projects submitted to the Joint Water Committee during the period 1996-2008 in per cent. Source: Richard, 2012.
*Approved by JWC/ not approved by Israeli Civil Administration or no possibility execution

As Mekorot is the only water supplier in the West Bank, Palestinians are often forced to rely on it to cover their water needs through block purchases. In 2012, these purchases amounted to about 34% of the West Bank’s total (including about 60% of its municipal needs).[4] 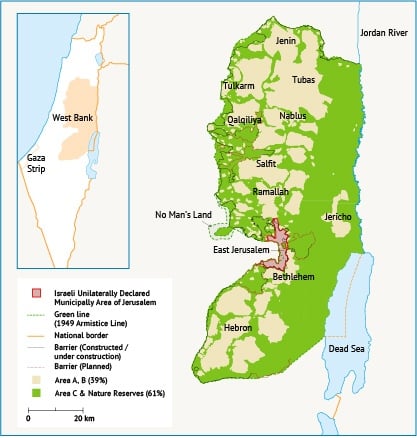